In South Africa alone there are more than 55 million citizens, and it can be assumed that most will not be exposed to the services we offer. Redpoint Consulting believes in duplicating the learning and benefits of development into this untouched potential of Africa through their students. Here are ‘summits’ reached in Africa:

The students as a group decided to contribute to the corporate CSI initiative which offers Saturday schools to less privileged institutions in Johannesburg. The students identified four topics which would benefit matriculants, and presented these skills in a Saturday workshop. The feedback from the students in ‘paying it forward’ was:

‘When I saw the “lightbulb” moment on each of the matriculant’s faces, I knew that I had made a difference. I believe the interaction and constant asking and answering of questions is what added value to the exercise.’

‘That leading by example and imparting knowledge is the most precious gift you can give someone’.

‘Having been part of these exercises in the past I was jaded by what I had experienced and saw no lasting improvement made by these initiatives. We went to a halfway house for abused, neglected and abandoned children. The House had as many as 20 kids at any given time living  in a 4 bedroom house. But as I learned about each of the kids’ stories something inside me broke. These kids are not broken, they are not inferior or lost. These kids have the same unlimited potential of any other child. These kids are brave survivors of horrific circumstances, which ended up teaching me something rather than me teaching them’.

The student approached and utilized the Management Team of an under-privileged primary school and offered leadership training on aspects they felt would benefit them. A Friday afternoon workshop turned into a further five workshops requested by the motivated and eager management team of the school. The workshops utilised Redpoint content on EQ, Conflict Management, Leadership skills, Managing the younger generation and Perception Management.

‘I was so overwhelmed and honored to be asked to come back. I didn’t know that it would have such an impact. I can’t wait to go back…’

The Police and a Telephone:

The student, for unfortunate reasons, had to engage with the police station in her area. She was shocked and frustrated by the handling of the telephone request and thus approached them a few weeks later. The police station eagerly grabbed the opportunity to learn new skills. The student developed a four hour workshop from the Redpoint content and engaged in the skills program free of charge. The police station felt much more empowered to deal with anger and trauma after the workshop.

‘I felt so humbled to be able to teach the police something, and realized that we are needed not just in our workplace, what a humbling experience.’

The student targeted women leaders in her community and presented four workshops based on the Redpoint program. Topics included leadership styles, qualities of a good leader, duties of a leader among others.

‘I was only going to do one workshop, and now it was four. What a journey of giving back it was!’

Matriculants at a High School:

The student approached a school and offered to share some insights with the outgoing matriculants of 2013. The importance of values, how to effectively communicate, the power of positive influence, your reputation and social media, and the 5 levels of Leadership gained from the Redpoint program was shared with the matriculates.

‘I was so scared at first but once their hands went up with questions I knew I had something to offer – what a great and motivational opportunity for me!’

The student engaged with Garden of Life, a non-profit organization, who empowers unemployed miners to sustain themselves through growing vegetables. In order to sustain the garden the student offered a seminar to attendees by linking Personal Values to each plant. The importance of values and its role in guiding behaviour, which forms part of the Redpoint program, was linked to each plant so as to motivate the miners to tend to and sustain their gardens.

‘I never realised how Values can motivate others, and linking it to something natural like a plant was a great experience – for them and for me’.

The student had the opportunity to take the Redpoint program to a church where those who are leaders in their place of work, can gain leadership skills. A program with basic notes were designed and handed to each member for future reference. The student was asked to take them through the whole program in the next few months.

‘As a preacher for the church it was wonderful to link business concepts to the word of God – and to see how it motivated the members of the church’. 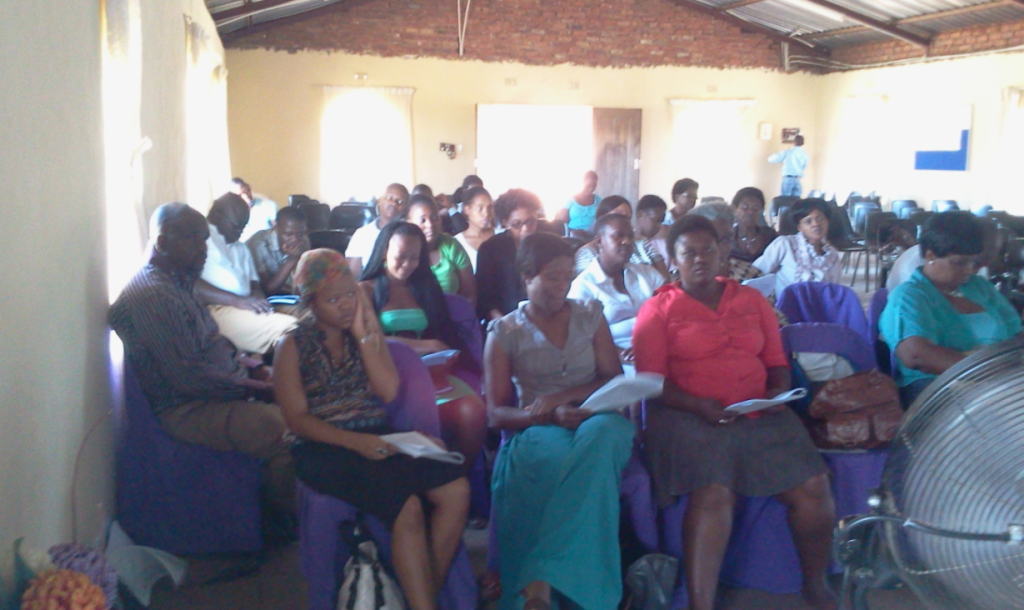 The student approached street vendors who re-actively rely on their clientele for business. He decided to share skills on how to approach a customer by observing their behaviour. The vendors had him sit down on a bin and he spent three hours sharing his skills around the four Interpersonal styles of customers and how to approach them.

‘Now I did not think that I would sit on a street corner and consider selling African wire art, but wow, they can make a lot of money if they apply those simple tricks! I am going to look for more street vendors and share more of this!’